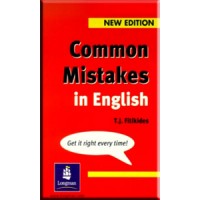 Brand New International Paper-back Edition same as per description, **Economy edition, May have been printed in Asia with cover stating Not for sale in US. Legal to use despite any disclaimer on cover. Save Money. Contact us for any queries. Best Customer Support! All Orders shipped with Tracking Number.

Nearly a quarter of a century has elapsed since common mistakes in english was first published. during this period several hindred thousand copies of the book have been disposed of, and, to quote the publishers, it has sold practically in every country in the world, in fact everywhere english is taught as a second language. nevertheless, the twenty - fifth anniversary is so important an occasions that it is being commomorated with the publication of this new edition, wich has been thoroughly revised and considerably enlarged...