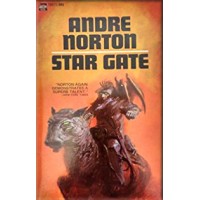 When Kincar s'Rud, of mixed Gorthian and Star Lord blood, followed the Star Lords through the shimmering gate that led to alternate universes, he found himself on a Gorth entirely different from the world he had known.

At first the Gorthians appeared to be the same, but his former friends turned out to be his enemies. For they were the people his friends might have been, had they made different choices at crucial moments in their lives. And soon Kincar and his real allies would have to confront their own evil, might-have-been selves...