The Manitou ؛ As spine - chilling as THE OMEN 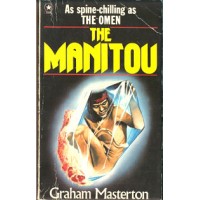 As spine - chilling as the omen

It only grows at night

Karen Tandy was a sweet and unassuming girl until she discovered the mysterious lump growing underneath her skin. As the doctors and specialists puzzle over the growth, Karen's personality begins to change. The doctors decide to cut out the lump―but then it moves. Now a chain reaction has begun and everyone who comes in contact with Karen Tandy understands the very depths of terror. Her body and soul are being taken over by a black spirit over four centuries old. He is the remembrance of the evils the white man has bestowed on the Indian people, and the vengeance that has waited 400 years to surface. He is the Manitou.

Graham Masterton (born 16 January, 1946, in Edinburgh) is a British horror author. Originally editor of Mayfair and the British edition of Penthouse, Graham Masterton’s first novel, The Manitou, was released in 1976. This novel was adapted in 1978 for the film The Manitou. Further works garnered critical acclaim, including a Special Edgar award by the Mystery Writers of America for Charnel House and a Silver Medal by the West Coast Review of Books for Mirror. He is also the only non-French winner of the prestigious Prix Julia Verlanger for his novel Family Portrait, an imaginative reworking of the Oscar Wilde novel The Picture of Dorian Gray. Masterton was also the editor of Scare Care, a horror anthology published for the benefit of abused children in Europe and the USA.