The Essence of Rumi's Masnavi 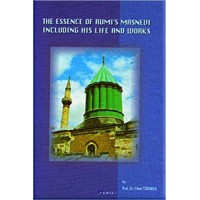 The Essence of Rumi's Masnavi

It is a remarkable research in English on Rumi that covers the period in which Rumi lived and the teachings of Rumi's father,his disciple Brurhaneddin Tirmizi and Rumi' Master Shams. Then the best verses of Rumi's Masnavi follow in original form (Persian), corrected under the light of authentic MSS.

In Turkey Prof.Dr. Erkan Trkmen is known for his books on Rumi, Yunus Emre and M.Iqbal. Dr.Trkmen was born at Peshawar in 1943;and lived in India and Pakistan for 19 years where he had a good chance to learn Urdu,Punjabi,Pashto and Persian of Central Asia(Dari). He improved his English in the British schools of Pakistan. In 1962, he migrated to Turkey.

He had his B.A in English Language and Literature, Latin and Turkish.He got his Ph.D. from the Istanbul University,Faculty of Letters,Department of Oriental Studies.Later he got his Associate and full Professorship at the Seljuk University,Konya (Turkey),where he devoted his life for studying Mevlana Jelal al-Din Rumi.In ten years he accomplished his scientific research on Rumi and published his book entitled "The Essence of Rumis's Masnavi". The fourth edition of the book is about to appear from Pakistan. He has many articles on Rumi, Iqbal and Yunus Emre who are interlinked with their mystic poetry.